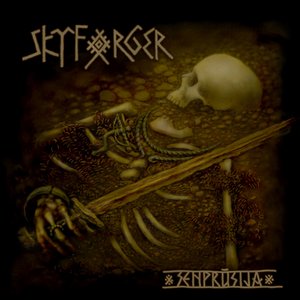 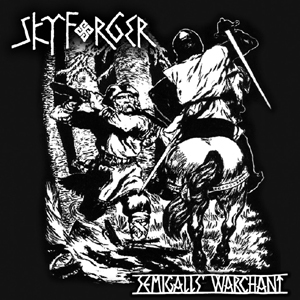 “And take care, it’s only just begun…”, that’s how Skyforger ends their biography
and that’s how I begun this review. So, let us continue. Finally there has arrived
a demo which really deserves to become released as a MCD. Everything is great
on this release of Immortalized Black metal. But copying? Not at all. Due to the
national influences the music (very well produced) has an identity of its own.
And as the packaging is so excellent I see no reason (except that you are not into
high quality Pagan/Black metal) why you should not buy this. But please, don’t have
this “no synthesizer” stuff printed on your sleeve, Skyforger. I guess you did it
because you want us to know that the pipes, kokles and horns are authentic.
But that we easily figure out ourselves as none of the members has a synth as an instrument.

I expected awesomeness and I got exactly that with this newest work of art by this
great Latvian Pagan / Folk Metal band. It sure did take a long time as they had last
released an album in 2000 but after hearing this I have to say it was well worth the
wait, afterall, it is said that good things take time.
Following a short intro the listener is presented with some of the best thick and juicy
riffing that it is nearly impossible to hold back the headbanging! For variety and to add
a special touch as the band tells of old mythological Latvian folklore, they use different
instruments like mouthharp, bagpipes, something called a kokle (I have no idea what
that is) and another unknown to me instrument called ģīga.
This is the perfect Folk / Pagan Metal album!
Of course these guys sing in Latvian but what I really like is that they also put the song
titles and lyrics in English so I can read along and share in the experience.
Kudos to the band for a brilliant album! If you like bands like Primordial, old Cruachan,
Falkenbach or Adorned Brood then you need Skyforger in your collection! 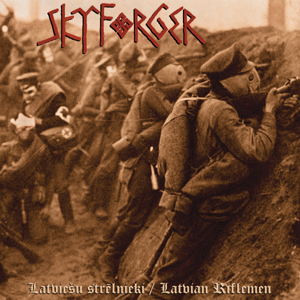 Sometimes I need some raw stuff, the kind able to shake your spine with
some genuine energy. This is what Skyforger is about: pagan-war metal
from Riga! This record is a collection of  battle hymns intended to wake your
animal instincts. I think metal is turning to something distant from the
original way started by prime-movers, from the singalongs without cheesy
melodies, from the epic mood without the Hollywood hypocrisy.
Skyforger reached their goal to paint an old-style war, the one made by
single men and not by machines: so, their music is a music made without
futuristic effects or golden spotlights, a music intended to rape your
next-trend urge. If I have to speak clear, this band is a fresh wind blowing
on my CD collection. Great guitar riffing and devastating drumming without
an inch of respect for the mainstream (even the extreme metal one).
I think you will love them or hate them without half ways…
As for me I’m ready to join the Riflemen, let the battle begin!

Eastern European Metal appears to be developing a highly distinctive sound.
Latvia’s Skyforger epitomise many of its characteristics. The band are obsessed
with their supposedly Latvian, pre-Christian pagan past and use every opportunity
to stress it. To their credit they’ve managed to do this without coming across as
vacuous or ridiculous. The lyrics are entirely in Latvian and a couple of tracks are
unadomed (and very lovely) Latvian folksongs. Many of the others use a variety
of traditional instruments including mouthharp, bagpipes and ‘kokles’.
Of course this is a primarily a Metal album and it works well on these terms too.
The epic, pagan feel and the battle scene on the cover reminded me of Bathory.
Skyforger avoid the often tinny sound of contemporary Black Metal with a strong
bassy, bottom end to their music. ‘Kauja Pie Saules’ is a substantial piece of work
with none of the tokenistic folkisms of some of their lesser peers, that should
firmly establish Latvia on the Metal map.